The Market of Islamic Goods and Services in Dagestan: Consumption Practices and Public Debates 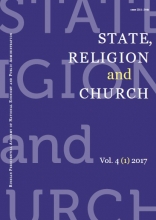