The Russian Origins of the So-Called Post-Secular Moment: Some Preliminary Observations 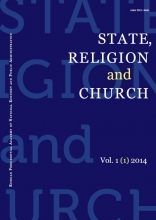