The Conflict of Immortalities: The Biopolitics of the Cerebral Subject and Religious Life in Altered Carbon 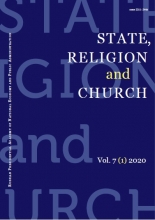