Peter and Fevronia and the Day of Family, Love, and Fidelity: Pronatalism and Unstable Gender Order in Contemporary Russia 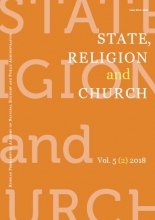