What Is Happening in the Islamic World? An Attempt at a Conceptualization 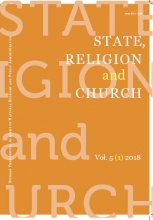