Post-Christian or Post-Atheistic Society? Some Characteristics of the Russian Regime of Secularity 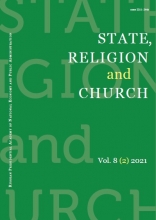