“Vocation in the Flesh”: Gender and Embodiment in the Religious Anthropology of Modern Catholicism 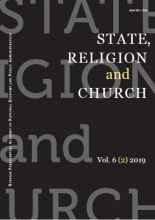