Russian «New Theology» in the Late 19th and Early 20th Century: On the Question of the Genesis and Content of the Concept 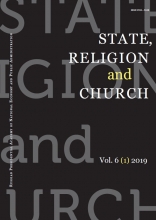