What Kind of Religious Persons Were Invited to the USSR, and Who Was Allowed to Go Abroad (1943–1985)

Keywords:
Central Committee of the Communist Party of the Soviet Union
the Council for Religious Affairs
the Council for the Affairs of the Russian Orthodox Church
Moscow Patriarchate
Soviet diplomacy 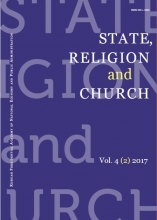