Religious Freedom as a Marker of Modernity: The Imperial Bequest 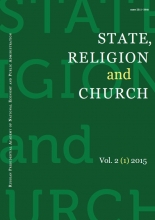